Spring is here and as our thoughts turn to life, love and warmer days ahead, I felt it would be a good time for a reality check about the true viscous nature of ... nature. Plants are not just pretty, they can be pretty deadly too. They are engaged in biological warfare against pests, predators and peers, strangling and smothering the competition and playing a role in our own personal human vendettas. Gardeners are often credited for their ability to nurture life - but sometimes they take it too - and not just by means of herbicide or insecticide! 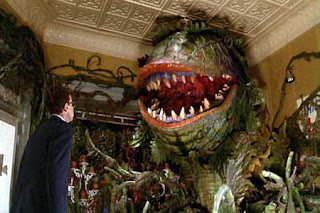 Audrey, the mother of all carnivorous plants

There are numerous cute mysteries involving garden titles and a few good ones involving horticultural means and methods (White Oleander was a favorite of mine.) Some of the more common plant derived poisons are belladonna, henbane, and strychnine which comes from the seeds of a tree. Cyanide is also naturally occurring - though usually in small quantities - in certain seeds and fruit stones, e.g., those of apple, mango, peach, and bitter almonds (not to be confused with it's highly publicized appearance in apple juice, believed to be a result of environmental poisoning)


Certainly plants can be the cause of death (and with so many medicinal uses, no doubt also the cure) but sometime they can be the witness. In The Secret Life of Plants Peter Thompkins suggested that plants are telepathic, sending out electrical impulses at the "sight" of another beings suffering. His book published the results of Cleve Backster, who in 1966 performed experiments involving plants and the use of lie detectors to measure their response. Backster claimed these plants responded to fear of damage, sympathy to the suffering of other living things and and the site of a perpetrator of these injuries. While his claims have since been disputed, it is a tantalizing idea - that plants could potentially help identify criminals - and in a way it's true. In the emerging field of forensic botany pollen, leaves, twigs and wood fibers can be used to identify the scene or timeline of a crime.


Still, sometimes plants are the reason for murder as detailed in this account of how the tree worshiping Germans of Medieval times punished anyone caught stripping the bark from a tree:
"The guilty party's navel was cut out and nailed to the injured tree.The culprit was then driven around and around the tree until all his innards were wound about the trunk of the tree. The life of a man for the life of a tree."
- From: The Golden Bough, Sir J. G. Frazer, Macmillan and Co. Limited, 1933, pg 110
Um, wow. That is not the only instance of barbaric behavior practiced by gardeners though. Gardeners, or Bostanci, of the Ottoman empire's rulers had an additional job title, - that of royal executioner. The Turks made quite a sport of it too: the condemned was challenged to race his executioner through the royals gardens to the execution spot. If he managed to outrun him, his sentence was reduced to banishment.  If he lost, he was strangled on the spot. Souflikar, gardener to Mahomet IV must have been quite an athlete. He is reported to have killed some 5,000 people in this role - an average of three a day over his five years at the post - by strangling them with his bare hands. 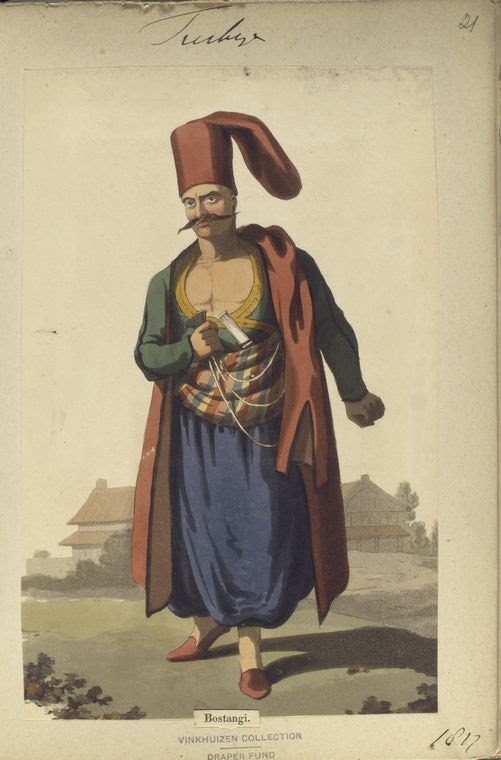 The Sultan's bostancı basha, or head gardener. The Ottoman corps of gardeners wearing the traditional uniform of muslin breeches, shirts cut low to expose muscular chests and red-skull-capped bostancıs, heralded death by decapitation or strangling for many thousands of Ottoman subjects.
Posted by Martin Shaw at 10:47 AM

Martin Shaw
A degreed horticulturist and college educated landscape designer turned lifestyle writer, I enjoy discussing all the ways in which good design, plants and nature affect and enhance our lives.